Christopher has worked in criminal defence for over 30 years. He has represented clients in a wide range of criminal offences in all the courts of Hong Kong defending those prosecuted by the Police, the Immigration Department, the Customs & Excise Department, the Labour Department and the ICAC. He represents suspects during the investigation stage, and defendants in trials, pleas in mitigation, bail applications, appeals and other ancillary applications in the criminal courts. Christopher also regularly represents companies and individuals in responding to investigations by the CCB and the SFC in all aspects of white collar crime.

In his previous firm he conducted the longest trial in its history acting as the trial advocate for two Defendants in multiple conspiracy and money-laundering charges in the District Court. Both of his clients were acquitted of all charges with costs awarded in their favour.

Whilst he is recommended as a leading practitioner in white collar crime in Hong Kong he also regularly undertakes defence work in common-or-garden crime on a daily basis. He has close ties with local barristers in establishing effective teams to defend those accused of criminal offences in the Hong Kong courts. 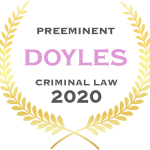 Some reported cases acting as advocate:

And as instructing solicitor: